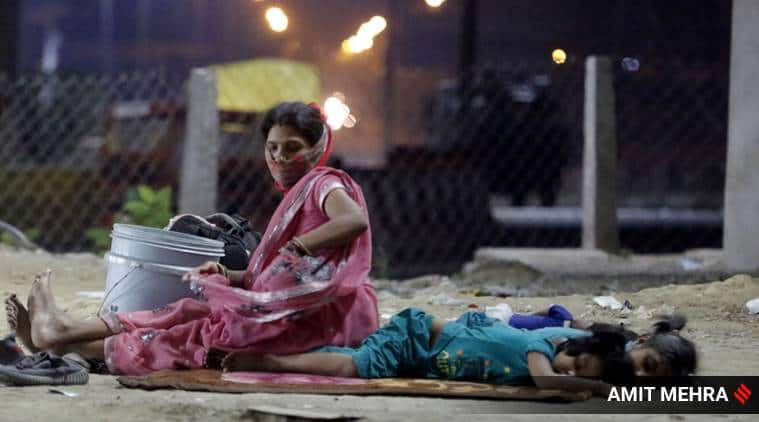 
Stranded migrant woman with her children wait to board a bus from Delhi.

Taking suo motu cognisance of the plight of lakhs of stranded migrant workers across the country, the Supreme Court on Tuesday issued notices to the Centre, state governments and Union Territories (UTs) seeking reply on steps taken to redeem the miseries of the migrants, PTI reported.

A bench of Justices Ashok Bhushan, Sanjay Kishan Kaul and M R Shah said there had been lapses on part of the Centre and state governments and directed immediate measures be taken to provide travel, food and shelter to the migrant labourers, news agency ANI said. Follow Covid LIVE

The court has listed the matter for further hearing on May 28 and asked Solicitor General Tushar Mehta to assist it on the issue of migrant labourers.

Express Opinion | Some journeys are about choice, others are forced displacement

The apex court’s criticism on the Centre’s and states’ approach to migrants comes after another bench had recently refused to intervene on a plea that sought the government to identify migrant workers, provide transport, food and shelter for them.

Millions of migrant workers have been in limbo ever since the country underwent its first stringent 21-day lockdown.

Barely 10 days ago, another bench of Justices L Nageswara Rao, S K Kaul and B R Gavai had said, how the court could stop migrants from walking. “How can anybody stop this when they sleep on railway tracks?” Justice Kaul asked. Justice Rao said, “There are people walking and not stopping. How can we stop it?”

The PIL had referred to the death of 16 migrant workers in Maharashtra on May 8 — headed to their villages on foot, they were run over by a train while sleeping on rail tracks and had sought to draw the court’s attention to the death of eight workers in a road accident in Guna.

Millions of migrant workers have been in limbo ever since the country underwent its first 21-day lockdown on March 24, in an attempt to break the coronavirus transmission chain. According to the 2011 census, the internal migrants account for 37 per cent (45.36 crore) of the country’s population.This includes inter-state migrants as well as migrants within each state, while the recent exodus is largely due to the movement of inter-state migrants.

Gujarat: Amended Freedom of Religion Act to come into force from June 15

‘Policy must change as per ground situation’: Supreme Court on mandatory CoWin registration for Covid-19 vaccine