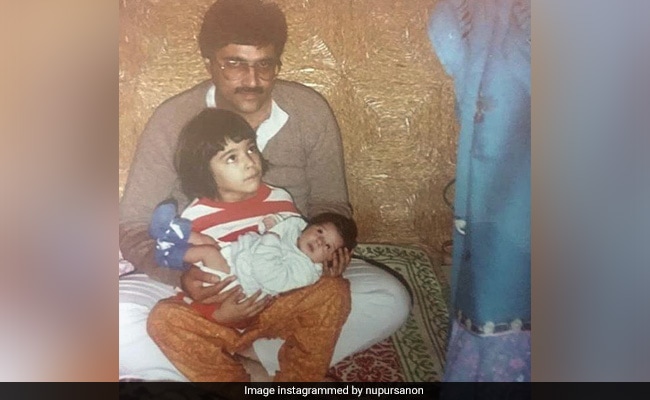 Nupur Sanon made a trip down memory lane on Wednesday and dug out an old photograph of herself and her elder sister, actress Kriti Sanon, and it is adorable. In the blast from the past, Kriti can be seen sitting on her father Rahul Sanon’s lap as she holds her little sister in her arms adorably. Sharing the photo, Nupur called Kriti her “chhoti mumma” and wrote: “Papa and chhoti mumma… The good old days when I was the cutest toy that nobody was ever willing to pass on to the other and so I had to chill in multiple laps at once.” Take a look:

Nupur Sanon’s throwback album is filled with pictures of her and her sister Kriti from their childhood. Earlier, sharing a photo of the duo playing with their father, Nupur wrote: “Just hanging in there.”

In one of Nupur Sanon’s previous posts, she can be seen chilling in a toy car with Kriti Sanon. Sharing the childhood memory, Nupur wrote: “Can we just go back to long drives inside the house in toy cars?”

Kriti Sanon, who made her debut in Bollywood with the 2014 film Heropanti, was last seen in the period film Panipat, in which she co-starred with Arjun Kapoor. She has featured in a number of films since 2014 such as Dilwale, Raabta, Bareilly Ki Barfi, Luka Chuppi, Arjun Patiala and Housefull 4. Kriti will next be seen in Laxman Utekar’s Mimi, which is a remake of the National Award-winning 2011 Marathi film Mala Aai Vhhaychy!. Kriti will play the role of a surrogate mother in the film.

Singapore Replaces US As India's Top market For Engineering Exports

“So Grateful We Found One Another,” Writes Nick Jonas In His Birthday Post For “Beautiful” Wife Priyanka Chopra