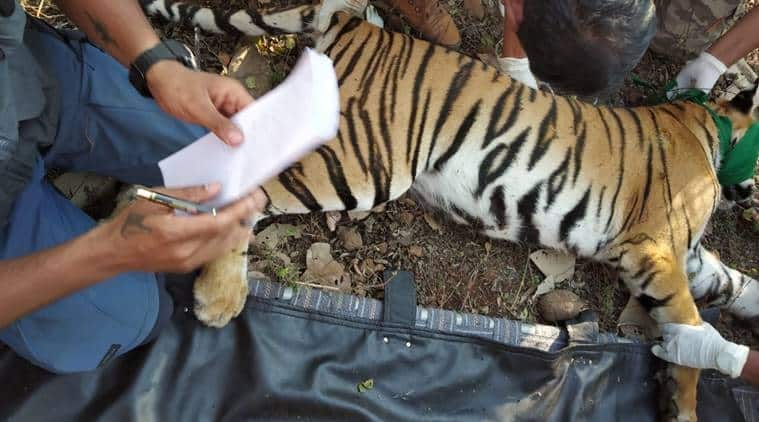 
This is the second problem tiger to be captured in Vidarbha this year. (Representational)

THE Forest department on Wednesday successfully captured the problem tiger of Tadoba Andhari Tiger Reserve (TATR) that had killed five persons in the past five months.

The mission saw success on the second day of its launch on Tuesday, after the Principal Chief Conservator of Forest (Wildlife), Nitin Kakodkar, issued an order to capture the tiger, known as KT1.

The first two victims of the tiger were in the core area of TATR while the remaining were in the buffer area. The last two killings occurred on June 4 and June 7.

This is the second problem tiger to be captured in Vidarbha this year. Last month, a tigress, also responsible for killing five persons, was caught in Gondia.

A full-grown tigress was found dead in Sitrampeth beat in the Moharli range of TATR buffer on Wednesday, a press note from TATR Field Director N R Praveen said. “The body was located close to Sitarampeth-Kondegaon road. Exact cause of death will be ascertained after post-mortem,” the release stated.

In another incident, a full-grown leopard was found dead on Wednesday in Saoli range in Chandrapur district. Chief Conservator of Forest, Rama Rao, said, “It was found trapped in a snare meant to poach wild boar.”

Digital India, Mocked By Congress, Proved To Be Boon Amid Pandemic: Smriti Irani

Four days after it strayed into Nagpur city, leopard still at large

Slogan row can help us, but must watch for BJP trap: TMC leaders