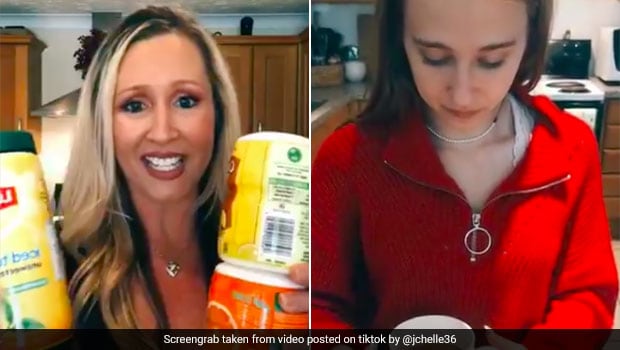 Hot tea is much-loved, but this user’s recipe did not go down well with netizens.

If there’s one beverage that is loved more than any other – it has got to be tea. Fans swear by the detoxifying and soothing nature of this hot decoction that they can have any number of times in the day. It can be had in a number of ways and with a number of additional ingredients such as milk, sugar and spices. However, one particular TikTok user has shared a recipe for hot tea that she loves, and it is not going down well with netizens. Take a look at the video:

The video was shared on TikTok by a user Michelle, who is an American mom living in the UK. She goes by the handle @jchelle36 and often posts videos of recipes and more with her daughter. She shared her favourite hot tea recipe which she made by mixing an instant tea mix, sugar and spices. Further, she also added some orange drink powder and lemonade powder to the tea. Then, she heated up some water and added a generous amount of this powdered mix to the tea.

The TikTok video found its way to Twitter as well, wherein it was shared by an aghast user.

I HAVE NEVER BEEN MORE HORRIFIED!!! pic.twitter.com/BimeihifzZ

The video soon went viral with over 3 million views on Twitter and over 17k likes. The comments section was alight with discussions around the bizarre recipe for hot tea, which contained copious amounts of sugar and some weird powdered mixes too. Some users asked, “Where are the POLICE?!” Another commented about how this recipe is not tea, “Ah yes. A steaming cuppa diabetes. THIS IS NOT TEA!!”

What do you think about this unusual tea recipe? Tell us in the comments if you’d like to try it!

North Korea cuts off all communication with South Korea

Indian Cooking Tips: Amp Up Your Meal With This Shahi Egg Curry Recipe (Recipe Video Inside)

Quick And Easy Snack: Make Paneer Tikka Like A Pro With This Chef Special Recipe Video

Raisins To Berries: 4 Dried Fruits That Are Good For Your Health