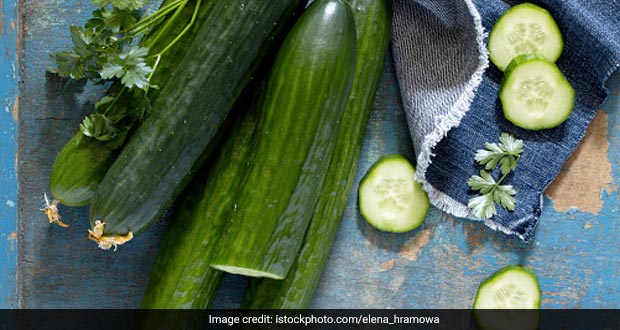 A TikTok user’s hack to milk cucumber is something quite familiar.

TikTok users often share ingenious hacks for our kitchen make our day-to-day tasks easier. There was a viral video that showed us an easy trick to reseal a cereal box, and yet another that taught us how to chop onions in minutes without tears. These tricks come in handy when we are faced with some menial struggles in the kitchen. A TikTok blogger recently came up with the hack of ‘milking’ cucumber before eating it, in order to rid the vegetable of its inherent bitterness. Take a look:

The kitchen hack was uploaded by a user who goes by the handle ‘BasicallyPerkfect’ on TikTok. The video struck a chord with thousands of users on the video-sharing application, garnering over 1 million views and 100k likes. She shared it as a cooking secret that her sister-in-law had told her about, which would restore the freshness in a cucumber and make it taste sweet again.

The video showed the process of cutting off the edge of a cucumber and then rubbing it with the rest of the vegetable. Repeated rubbing in circular motions makes the ‘bitterness’ or the ‘milk’ of the cucumber come out. The user called the milk ‘gross’ and ‘cheese-like’, making funny expressions while milking her cucumber.

(Also Read: Want To Chop Onions Quickly Without Tears? This TikTok User Has The Perfect Hack)

This hack is nothing new for us, as we all have been taught this easy hack to get a cucumber to taste sweet again. Although the video went viral on TikTok, it is a common trick used in many Indian households. Just like the Dalgona coffee trend which took social media by storm, Indians are proudly claiming the ‘Cucumber Milking’ trend as their own – saying that they did it first.

What do you think of the cucumber milking trend? Tell us in the comments below!

Can’t Bake The Perfect Cake? You Might Be Using Too Much Of These Ingredients

Street Food: How To Make A Wholesome Egg Roll In 15 Minutes