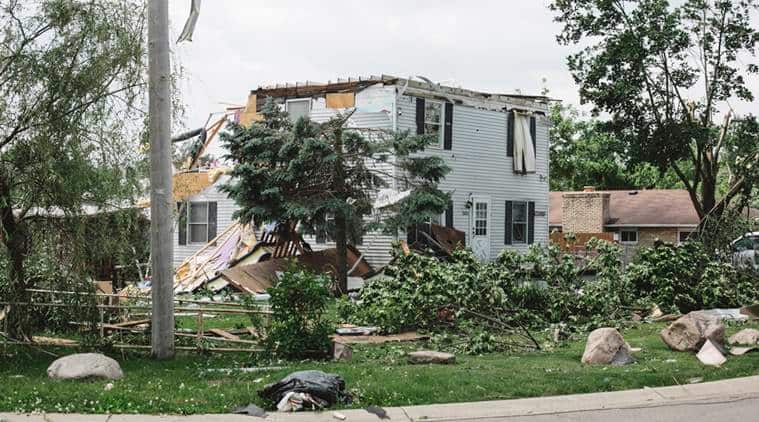 
Indonesia’s meteorological agency is predicting rain and strong wind for the next few days in Lampung and parts of western Sumatra.. (Andrew Spear/The New York Times/Representational)

A tornado ripped through several villages on Indonesia’s Sumatra island, killing at least two people, damaging hundreds of homes, and fatally knocking over a cow, a disaster official said Thursday.

Another six people, most with serious injuries, were taken to a hospital after the tornado touched down late Wednesday in Lampung province’s Tulang Bawang district, aid Raditya Jati, the National Disaster Mitigation Agency spokesman.

The powerful winds damaged 245 homes in three villages and knocked out power to most of the area, Jati said. The storm also threw a cow to its death, he said.

Officials were still evacuating villagers from affected areas on Thursday so they could clear debris.

A video released by the agency showed people run in panic when the wind started moving through their village accompanied by occasional flashes of lightning. People could be heard crying as the dark funnel cloud turned homes to rubble.

Indonesia’s meteorological agency is predicting rain and strong wind for the next few days in Lampung and parts of western Sumatra.

Seasonal downpours cause dozens of landslides and flash floods each year in Indonesia, a sprawling archipelago of 17,000 islands. Tornadoes, though not unheard of, are rare in Indonesia.

Undeterred by coronavirus, the Beethoven anniversary gets another year

How should I clean and store my face mask?

Assad’s uncle, the ‘Butcher of Hama,’ convicted in France

Kamala Harris: The inspiring story of many firsts