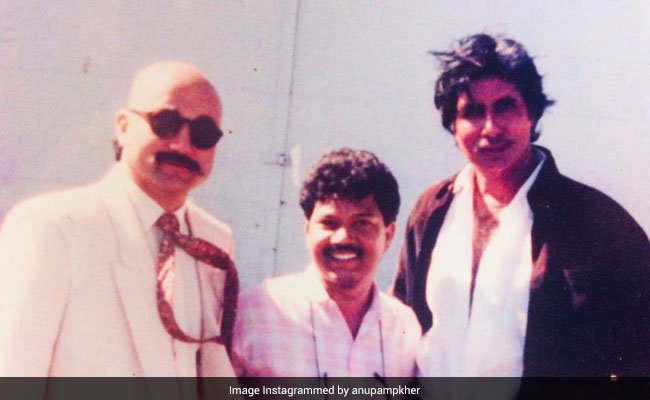 Amitabh Bachchan and Anupam Kher occupied a spot on the list on trends on Sunday after the latter shared a priceless throwback picture of themselves. On Saturday, Anupam Kher flipped through the pages of his shoot diaries and posted a picture from the sets of the 1991 film Hum, in which he co-starred with Amitabh Bachchan, Rajinikanth, Govinda, Kader Khan and Kimi Katkar. In the throwback photo, Amitabh Bachchan can be seen posing with Anupam Kher and his make-up man Bahadur Singh. Recalling filming movies in the 80s and the 90s, Anupam Kher captioned his post like this: “My make-up man of earlier days Bahadur Singh sent me this gem of pic with the tallest persona in our film industry, Amitabh Bachchan ji. The still is from the shooting of the film Hum in Mauritius. The picture revived so many memories of joy, happiness, fan moments and much more.”

“Those were the innocent days of cinema. Without mobile phones and vanity vans. Loved the human connection. I miss Mukul Anand, our director. He was an amazing human being,” he added.

Reacting to Anupam Kher’s post, his fans shared their memories of the 1991 film. “I watched Hum movie in the bus when I was traveling to village. I was in 9th standard. I spent 3 hours at night in bus to watch this movie, it’s nice,” wrote one of the users while other commented: “In quarantine, my dad told me to watch Hum. Amazing movie.”

Anupam Kher is best-known for his performances in films such as Saaransh, Ram Lakhan, Lamhe, Khel, Darr, Dilwale Dulhaniya Le Jayenge, Maine Gandhi Ko Nahin Mara and Special 26, to name a few. He was last seen in the 2019 crime-thriller One Day: Justice Delivered in which he co-starred with Esha Gupta, Kumud Mishra and Anusmriti Sarkar.

Gold Bond Scheme To Open On July 6: 10 Things To Know Before Investing