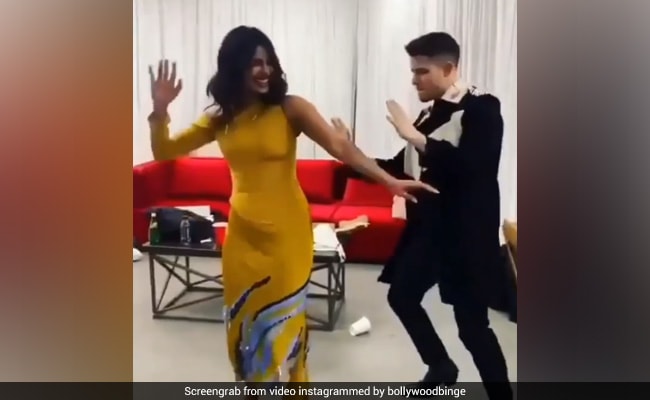 Priyanka and Nick in a still from the video. (courtesy: bollywoodbinge)

The Internet just chanced upon a throwback video of Priyanka Chopra and Nick Jonas dancing to Ajay Devgn’s song Hauli Hauli from the 2019 film De De Pyaar De, co-starring Rakul Preet Singh and Tabu. In the video, which has been curated by several fan pages dedicated to the star couple, Nick can be seen grooving to the song while Priyanka joins him midway and stars laughing uncontrollably. The video was originally posted by Nick’s sister-in-law Danielle Jonas in 2019 on her Instagram profile. She captioned the video: “Love you and your dance moves so much!”

Check out the video here:

Priyanka Chopra married Nick Jonas in a Christian and a Hindu ceremony in Jodhpur’s Umaid Bhawan Palace on December 1 and 2 in 2018. The couple later hosted receptions in Delhi and Mumbai. Ralph Lauren was the official couturier for the Church wedding, while Sabyasachi designed the outfits for the Hindu ceremony, which took place the next day.

Priyanka Chopra will next be seen in Netflix’s adaptation of The White Tiger, co-starring Rajkummar Rao. She also has the superhero film We Can Be Heroes and a film with comedian Mindy Kaling. She has also signed Amazon’s web-series Citadel. The actress also announced the Sangeet Project with Amazon Prime. Priyanka’s last theatrical release was The Sky Is Pink with Farhan Akhtar and Zaira Wasim.

High-Protein Breakfast: How To Make Fried Eggs In A Microwave (Recipe Video Inside)

Actor Ian Holm, Star Of Lord Of The Rings And Chariots Of Fire, Dies At 88