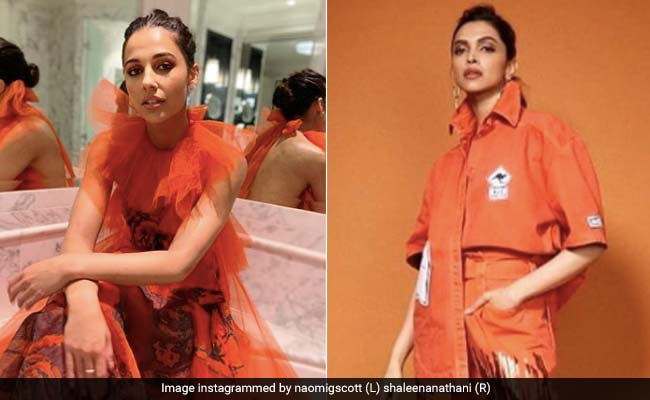 Actress Naomi Scott, who played the role of Princess Jasmine in Disney’s 2019 film Aladdin, and actress Deepika Padukone found a spot on the trends’ list as an old interview resurfaced on the Internet. In her interview to BBC at the time of Aladdin‘s release, Naomi Scott told BBC’s Haroon Rashid that a member of her film’s crew once thought that she stars in the Ram Leela song Nagada Sang Dhol Baje, which actually features Deepika. “I was like playing it (Nagada Sang Dhol Baje)… I was on set. I had like an American cast and crew. And I’m playing it because I love that song and literally someone was like: ‘Oh, it’s so beautiful. Nay, is that you?'”

Naomi Scott told the interviewer that she was glad to have been confused with Deepika Padukone: “And I was just like: ‘Yeah, it is… it is… I thought to myself that ‘You could be compared to worse people that Deepika’ and I was like ‘Well, I’ll take that. She’s pretty beautiful’.”

Aladdin also starred Egyptian-Canadian actor Mena Massoud in the titular role while Will Smith played the role of Genie. In the BBC interview, Naomi Scott added that the look and feel of Aladdin was very much inspired by the colourful and musical flavour of Bollywood.

Meanwhile in 2017, Deepika, mistaken for her colleague Priyanka Chopra by the foreign media and international paparazzi several times, had said: “It’s not just about me being offended. It’s you all in this room who should be offended. It’s not just ignorance, it’s also racist. Two people of similar colour are not the same people. So, you as fellow Indians should actually be calling them out and educating them instead of encouraging it. Ignorance is ignorance. I feel bad for them,” reported PTI. Priyanka was also mistaken by ABC once when they used a photo of Yukta Mookhey instead of the Quantico star. Last year, actress and TV personality Padma Lakshmi called out The New Yorker magazine for tagging Priyanka in a post featuring her.