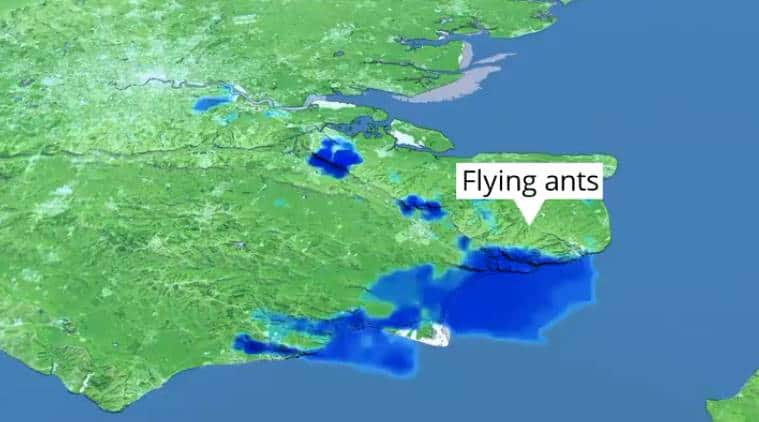 
Taking to Twitter, the weather department shared a video in which a giant cloud of ants appears to be entering the southeast part of the country. (Videograb: UK Met Office)

Satellite imagery of a 50-mile (80 km) wide swarm of flying ants, hovering over parts of England, was briefly mistaken for rain clouds by the UK Met Office’s weather radar on Friday. Taking to Twitter, the weather department shared a video in which a giant cloud of ants appears to be entering the southeast part of the country.

It’s not raining in London, Kent or Sussex, but our radar says otherwise…📡

During the summer ants can take to the skies in a mass emergence usually on warm, humid and windless days #flyingantday pic.twitter.com/aMF6RxR943

Alarmed by the sudden appearance of rain clouds despite otherwise dry and sunny weather, the forecasters inspected the particles in the satellite images and found that they closely resembled bugs as they were longer and wider than raindrops, CNN reported.

Many UK residents soon began posting about the sudden appearance of thousands of flying ants across parts of London, Kent and Sussex as well as the eastern part of the country. “It’s not raining in London, Kent or Sussex, but our radar says otherwise,” the UK’s Met office tweeted.

A spokesperson for the national weather agency told the Guardian, “It’s not unusual for larger swarms to be picked up.” During the summer months thousands of flying ants are known to take to the skies in the UK, in what is popularly known as ‘Flying Ant Day’.

So today I learnt the UK has a thing called flying ant day. Massive amounts of ants erupting from my geraniums was an alarming way to discover this #FlyingAnts pic.twitter.com/ThK4KxXFkA

Absolute scenes above my wildlife garden today… It’s flying ant day 🐜✈️🐜 which has brought in hundreds of gulls directly above the garden! I’ve created space for dozens of ant nests in my garden & this is the bonus result once a year! #flyingantday #FlyingAnts @bbcpointswest pic.twitter.com/reXFcWH0Y5

#flyingantday #FlyingAnts Amazing – hundreds of them in my garden! They’re not socially distancing one bit though. pic.twitter.com/QWSSr4pCeT

Happy #flyingantday everyone – the seagulls have clearly been waiting for this day all lockdown! 🐜 🐜 pic.twitter.com/DwLJWdxDbU

The phenomenon generally occurs annually during sunny and windless days, when young male and female ants leave their nests to mate and start new ant colonies. A study conducted by the Royal Society of Biology found that the ants only flew when the temperature was above 13° C and wind speeds remained less than 6.3 metres per second.

The mob made me do it: US Capitol rioters claim Jan 6 crowd at fault

China struggles to keep the lights on amid sky-high demand