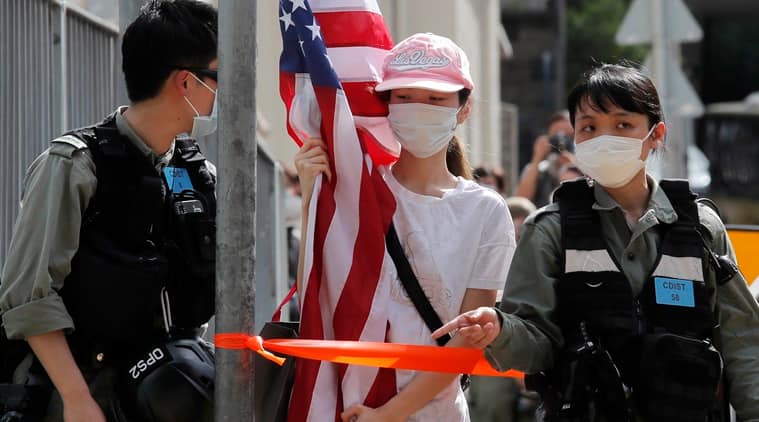 
A protester carrying an American flag as she is stopped by riot police during a protest outside the U.S. Consulate in Hong Kong, Saturday, July 4, 2020 to mark the American Independence Day or “the Fourth of July.” China’s government and pro-Beijing activists in Hong Kong are condemning what they call foreign meddling in the territory’s affairs, as countries move to offer Hong Kongers refuge and impose sanctions on China over a new security law. (AP Photo/Kin Cheung)

The top American diplomat in Hong Kong said Monday that it is a “tragedy” to use the semi-autonomous Chinese territory’s new national security law to chip away at “fundamental freedoms” in the Asian financial hub and create an “atmosphere of coercion and self-censorship.”

“Using the national security law to erode fundamental freedoms and to create an atmosphere of coercion and self-censorship is a tragedy for Hong Kong,” Hanscom Smith, U.S. consul general to Hong Kong and Macau, told reporters.

“Hong Kong has been successful precisely because of its openness and we’ll do everything we can to maintain that.” The law, imposed last week following anti-government protests in Hong Kong last year, makes secessionist, subversive, or terrorist activities illegal, as well as foreign intervention in the city’s internal affairs.

Any person taking part in activities such as shouting slogans or holding up banners and flags calling for the city’s independence is violating the law regardless of whether violence is used.

Critics see it as Beijing’s boldest step yet to erase the legal firewall between the former British colony and the mainland’s authoritarian Communist Party system.

Since the law went into effect, the government has also specified that popular protest slogan “Liberate Hong Kong, revolution of our time” has separatist connotations and is thus criminalised.

In Hong Kong’s public libraries, books by pro-democracy figures have been pulled from the shelves, including those authored by prominent pro-democracy activist Joshua Wong and politician Tanya Chan.

The authority that runs the libraries said it was reviewing the books in light of the new legislation.

Many pro-democracy shops that publicly stood in solidarity with protesters have moved to remove pro-democracy sticky notes and artwork that adorned the walls of their stores, fearful that the content might violate the new law.

A 23-year-old man, Tong Ying-kit, has become the first person in Hong Kong to be charged under the new law, for allegedly driving a motorcycle into a group of policemen while bearing a flag with the “Liberate Hong Kong, revolution of our time” slogan.

More than 200 scientists tell WHO coronavirus is airborne: Report - Times of India

Covid mutations undercut optimism even as more vaccines near