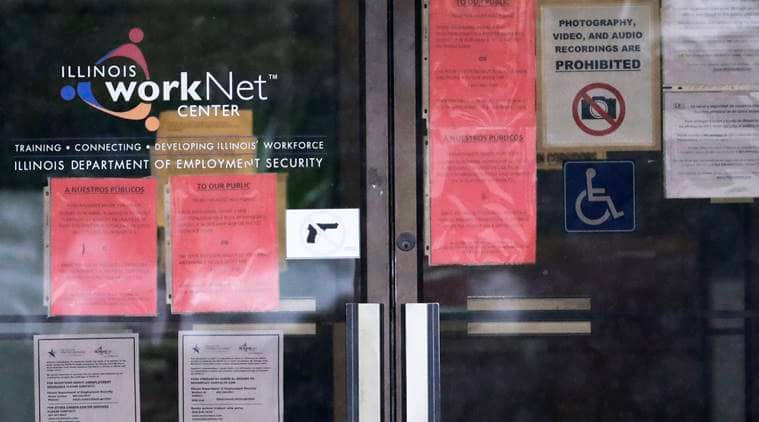 An estimated 2.1 million Americans applied for unemployment benefits last week despite the gradual reopening of businesses around the country, bringing the running total since the coronavirus shutdowns took hold in mid-March to about 41 million, the government said Thursday.

The figures underscored the continuing damage to businesses and livelihoods from the outbreak that has now killed at least 100,000 people in the US, more than the number of Americans lost in the Vietnam and Korean wars combined, and more than 33 times the death toll on 9/11.

The US unemployment rate was 14.7 per cent in April, the highest since the Depression, and many economists expect it will near 20 per cent in May.

First-time applications for unemployment, though still extraordinarily high, have fallen for eight straight weeks, and states are gradually letting stores, restaurants, salons, gyms and other businesses reopen. But other employers are still laying off workers in the face of a deep -recession.

The Labour Department report included a positive sign: The number of people now receiving benefits fell for the first time since the outbreak intensified in mid-March, from 25 million to 21 million. That suggests companies are starting to rehire and could mean that total job losses will peak in May.

Still, economists say many of the jobs lost are never coming back, and double-digit unemployment could persist through 2021. Elsewhere around the world, India saw another record daily jump in coronavirus cases, while Russia reported a steady increase in its caseload, even as the city of Moscow and provinces across the vast country moved to ease restrictions in sync with the Kremlin’s political agenda.

The layoffs in the US have hit some parts of the country with particular force. Nevada’s unemployment rate in April reached 28.2 per cent, the highest in the nation. Michigan’s was next at 22.7 per cent followed by Hawaii at 22.3 per cent.

Connecticut’s jobless rate was 7.9 per cent, the nation’s lowest, followed by Minnesota (8.1 per cent) and Nebraska (8.3 per cent). As bad as the numbers are, the real picture may be worse. The government counts people as unemployed only if they’re actually looking for a job, and many probably see no point in doing that when so many businesses are shut down.

The figures come amid an intensifying debate in Congress over whether to extend $600 in extra weekly federal unemployment benefits, which were provided under rescue legislation passed in March but are set to expire July 31.

Democrats have proposed extending the payments, while Republicans have argued that the extra money could discourage laid-off workers from returning to jobs that pay less than they are getting on unemployment.

In the US, Las Vegas casinos and Walt Disney World have made plans to reopen, and crowds of unmasked Americans are expected to swarm beaches over the summer months. Public health officials predict a resurgence by fall.

Despite the risks, the pressure for easing restrictions has risen across the globe as the economic pain has worsened.

Worldwide, the virus has infected more than 5.7 million people and killed over 355,000, with the U.S. having the most confirmed cases and deaths, according to a tally by Johns Hopkins University. Europe has recorded about 170,000 deaths.

The story told by art in the Oval Office: A President’s hopes and view of history

Important that Taliban adheres to commitment to not allow use of Afghan soil for terrorism, says India