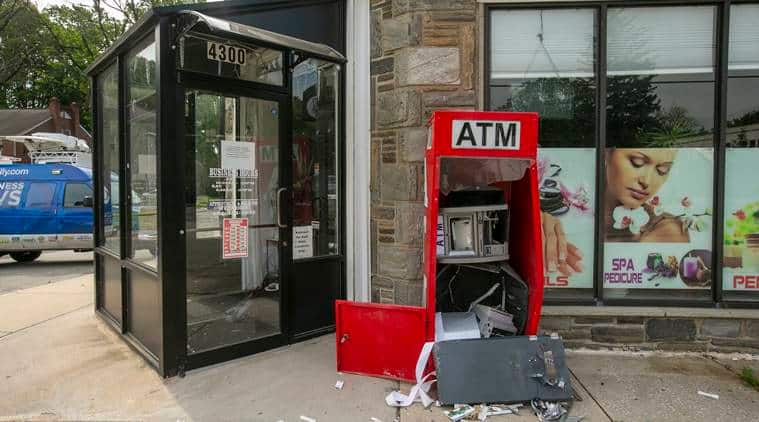 
A destroyed cash machine stands outside a business in Upper Darby, Pa., Wednesday, June 3, 2020. Explosions have hit 50 cash machines in and near Philadelphia since the weekend, and one man has died, in a coordinated effort to steal them or take the money inside, authorities said Wednesday. (Alejandro A. Alvarez/The Philadelphia Inquirer via AP)

Explosions have hit 50 cash machines in and near Philadelphia since the weekend, and one man has died, in a coordinated effort to steal them or take the money inside, authorities said Wednesday.

A 25-year-old who’s accused of selling homemade dynamite on the streets with instructions on how to use it on ATMs has been arrested, though authorities aren’t yet sure whether the man is connected to the coordinated effort, the state attorney general said.

Police earlier urged businesses that host the machines to remove cash to discourage further thefts, one of which resulted in the death of a 24-year-old man hours after he tried to break into an ATM early Tuesday, authorities said.

Protesters kneel Wednesday, June 3, 2020, outside the 26th District Police station in the Fishtown neighborhood of Philadelphia, demonstrating against racism and over the death of George Floyd. (AP Photo/Matt Slocum)

Talib Crump is charged with felony possession of weapons of mass destruction as well as numerous misdemeanor charges including weapons offenses, terroristic threats and risking a catastrophe. An email seeking comment on Crump’s behalf was sent to the Defender Association of Philadelphia, listed in court documents as representing Crump.

Crump had “bragged on social media that using dynamite was better than bullets for robbing an ATM and offered up explicit instructions on how to best set dynamite up to blow up an ATM,” Attorney General Josh Shapiro said at his news conference Wednesday.

“He further described having done this at an ATM the night before, stealing more than $8,500,” he said.

Crump was taken into custody during an undercover buy, and his vehicle was found to have enough dynamite to blow up at least four more ATMs, Shapiro said.

Demonstrators chant Tuesday, June 2, 2020, at Rittenhouse Square in Philadelphia, during a protest over the death of George Floyd. (AP Photo/Matt Rourke)

“This individual, whether he proves to be associated with coordinated efforts to blow up ATMs in Philadelphia, sought to take advantage of civil unrest to sow chaos and destruction,” Shapiro said.

Cash machines in some other cities, including Pittsburgh and Minneapolis, also have been stolen from or damaged since civil unrest struck the nation when George Floyd was killed on Memorial Day. But Philadelphia’s problem appears to be on a larger scale.

Floyd, a black man, died in handcuffs while a Minneapolis police officer pressed a knee on his neck even after he pleaded for air and stopped moving.

The officer, Derek Chauvin, was fired May 26 and had his initial charge of third-degree murder upped to the second degree on Wednesday. Three other officers who were at the scene were also charged Wednesday with aiding and abetting second-degree murder and manslaughter.

North Korea says US in no position to criticise China

Among those lining up to fight in Nagorno-Karabakh, Armenian youth with a strong Kolkata connect

NYC seeks to reinstate virus restrictions in some spots