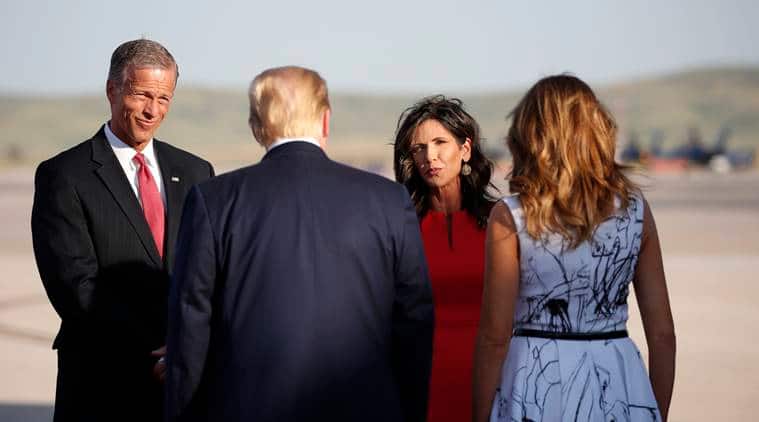 Shortly after fireworks above Mount Rushmore disappeared into the night sky on Friday, South Dakota Gov. Kristi Noem accompanied US President Donald Trump aboard Air Force One despite having had close contact with Trump’s son’s girlfriend, who had tested positive for the coronavirus.

Trump has been in a position all along to encounter a virus that spreads from people who don’t feel sick, such as Noem, who had interacted closely at a campaign fundraiser with Donald Trump Jr.’s girlfriend, Kimberly Guilfoyle, who turned out to be infected. Noem didn’t wear a mask on the plane and chatted with the president as the flight returned to Washington, D.C., according to her spokesperson, Maggie Seidel.

Noem had tested negative for COVID-19 shortly before welcoming Trump to South Dakota on Friday, a day after she had interacted with Guilfoyle. One photo on social media showed Noem and Guilfoyle, who is also a Trump campaign staff member, hugging. The Trump campaign announced that Guilfoyle had tested positive on Friday.

Guilfoyle’s infection prompted some Republicans, such as Rep. Greg Gianforte of Montana, to take precautions against the spread of the coronavirus. He suspended in-person campaigning for his gubernatorial bid after his wife and his running mate both attended a fundraiser with Guilfoyle earlier in the week.

Noem doesn’t plan anything similar or to get tested again for the virus, Seidel said. She cast Noem’s decision to fly on Air Force One as a demonstration of how to live with the virus. Seidel pointed to comments from the World Health Organization that the spread of the virus is “rare” from asymptomatic people. But that runs counter to guidance from public health experts, including the Centers for Disease Control and Prevention, that advises people to wear masks when interacting with people outside their household.

The CDC says that people with active infections can still test negative, especially if it is early in the infection. The agency recommends that even people who test negative take precautions like avoiding close contact and wearing a mask around others.

Asked about Trump’s interaction with Noem, the White House noted the frequency with which the president is tested.

“The president is tested constantly, has tested negative, and those around him are tested as well,” White House press secretary Kayleigh McEnany said.

When asked why Noem was allowed to travel on Air Force One, McEnany referred the question to the Secret Service, but added: “They take the president’s health very seriously. They would never put him in a situation that would put him in harm’s way.”

The Secret Service referred questions to the White House press office, which provided no additional comment.

Ian Fury, a spokesperson for Noem, said Monday on Twitter that the governor had consulted with the White House doctor before she boarded Air Force One and was told it would be OK to fly.

As the number of people hospitalized from COVID-19 in South Dakota has decreased in recent weeks to just 59 people statewide, Noem has doubled down on her relaxed approach to the pandemic. Even as Republican governors in states like Texas have moved to require people to wear masks, Noem didn’t require distancing or masks at the July 3 celebration at Mount Rushmore, an outdoor event at which few in the closely packed crowd wore masks.

The influx of tourists for the Rushmore fireworks has some local leaders and doctors concerned that the area could see a spike in cases. Seidel said the governor worries about other effects of the virus, such as unemployment and domestic violence.

When Seidel was asked about a risk to Trump’s health from Noem’s presence on Air Force One, she said, “I don’t understand why Gov. Noem now needs to manage the president’s medical care.”

5 Best Non-Veg Pizza Recipes You Can Try At Home

Kamala Harris speaks to WHO chief Ghebreyesus over phone