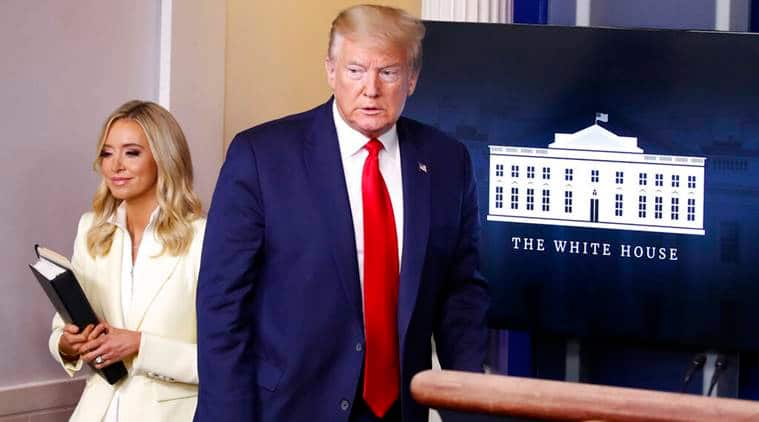 
President Donald Trump arrives to speak with reporters about the coronavirus in the James Brady Briefing Room of the White House, Friday, May 22, 2020, in Washington with White House press secretary Kayleigh McEnany. (AP Photo/Alex Brandon)

The US will consider rejoining the World Health Organization if it ends corruption and reliance on China, the White House said on Sunday.

President Donald Trump on Friday terminated America’s relationship with the WHO and accused the global health body of being hand in glove with China in sharing inaccurate information to the world about the coronavirus pandemic that has killed more than 370,000 people globally.

“The WHO needs to reform. What the president said, if the WHO reforms and ends the corruption and ends the reliance on China, the US will very seriously consider coming back,”US National Security Advisor Robert O’Brien told ABC News.

The US has said that it will spend the money, over USD 400 million which it gives to the WHO, on other international public health bodies.

Read| US ‘very saddened’ by what happened to the relationship with China: Trump

“We’re going to take that same money and make sure it gets to the Doctors Without Borders and the Red Cross and the hospitals all over the world that need it, and doesn’t go through a corrupt international organisation that’s controlled by the Chinese Communist Party. That’s for sure,” O’Brien said.

Appearing on the CNN on another Sunday talk show, O’Brien said that the US has got a series of measures to deal with China and the way they’ve choked out freedom in Hong Kong.

“The president made a very important announcement on that front on Friday and the US government is looking at all of our relations with Hong Kong and China. So there will be a response and it will be proportional, but this is not something that our adversaries are going to get away with for free,” he added.