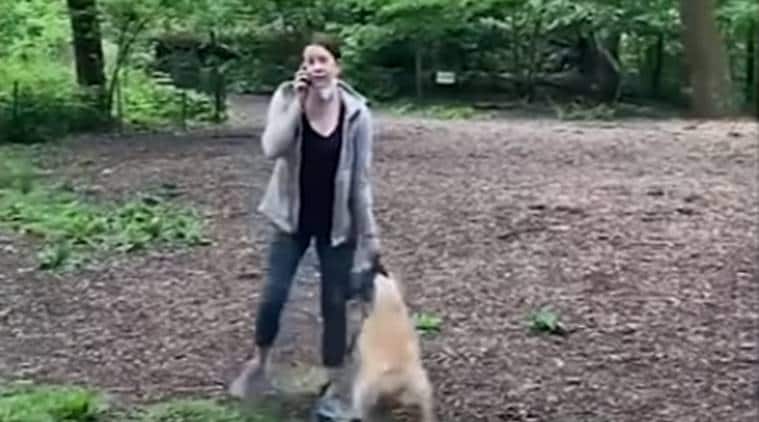 
The widely watched video — posted on Facebook by Christian Cooper and on Twitter by his sister — sparked accusations of racism and led to Amy Cooper getting fired. (Screengrab)

The verbal dispute between a white woman with an unleashed dog and a black man bird watching in Central Park might normally have gone unnoticed in a city preoccupied by the coronavirus pandemic.

That changed when birdwatcher Christian Cooper pulled out his phone and captured Amy Cooper calling police to report she was being threatened by “an African-American man”.

The widely watched video — posted on Facebook by Christian Cooper and on Twitter by his sister — sparked accusations of racism and led to Amy Cooper getting fired.

“Unfortunately we live in an era with things like Ahmaud Arbery, where black men are seen as targets,” Christian Cooper told CNN. “This woman thought she could exploit that to her advantage, and I wasn’t having it.”

The confrontation began early Monday morning when Christian Cooper said he noticed Amy Cooper had let her cocker spaniel off its leash against the rules in the Ramble, a secluded section of Central Park popular with birdwatchers.

In a Facebook post, he claimed the dog was “tearing through the plantings” and told her she should go to another part of the park. When she refused, he pulled out dog treats, causing her to scream at him to not come near her dog.

Amy Cooper also warned him she would summon police unless he stopped recording.

“I’m going to tell them there’s an African American man threatening my life,” Amy Cooper is heard saying in the video as she pulls down her face mask and struggles to control her dog.

“There’s an African American man, I’m in Central Park, he is recording me and threatening myself and my dog…Please send the cops immediately!” she says during the call before he stops recording.

Police say by the time they responded, they were both gone.

In the fallout, investment firm Franklin Templeton announced on Tuesday afternoon it had fired Amy Cooper, saying, “We do not tolerate racism of any kind.” A group called Abandoned Angels Cocker Spaniel Rescue said it had custody of her dog for the time being. The pet could be heard coughing in the video after she clenched it by the collar with its front legs off the ground.

Amy Cooper released an apology through a public relations service Tuesday night, saying she “reacted emotionally and made false assumptions about his intentions”.

“He had every right to request that I leash my dog in an area where it was required,” she said in the written statement. “I am well aware of the pain that misassumptions and insensitive statements about race cause and would never have imagined that I would be involved in the type of incident that occurred with Chris.”

She told CNN earlier Tuesday, “I am not a racist.”

“I think I was just scared,” she said. “When you’re alone in the Ramble, you don’t know what’s happening. It’s not excusable, it’s not defensible.”

New York City Mayor Bill de Blasio said the video exemplified hatred that has “no place in our city”.

“The video out of Central Park is racism, plain and simple,” de Blasio tweeted. “She called the police BECAUSE he was a Black man. Even though she was the one breaking the rules. She decided he was the criminal and we know why.”

In an interview with The New York Times, Christian Cooper showed empathy for the stranger with whom he shares a last name.

“It’s a little bit of a frenzy, and I am uncomfortable with that,” he said. “If our goal is to change the underlying factors, I am not sure that this young woman having her life completely torn apart serves that goal.”

Karan Johar Thinks Rani Mukerji Is A "Magician." Here's Why

Over 30,000 Indians Evacuated Via Special Flights Till May 25: Hardeep Puri