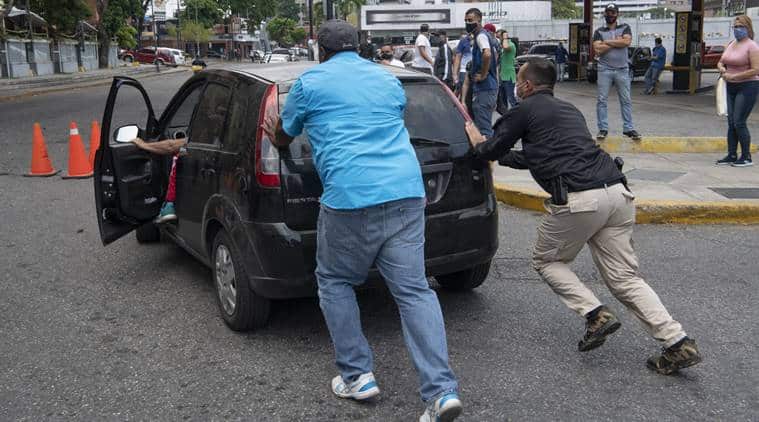 
People push a vehicle that ran out of fuel to a Petroleos de Venezuela SA (PDVSA) gas station in Caracas, Venezuela (Bloomberg)

Venezuela’s President Nicolas Maduro said fuel prices would increase starting in June, a historic policy shift after decades of subsidies that have allowed Venezuelans to essentially fill their tanks for free.

Gasoline will be sold at 5,000 bolivars (2.5 U.S. cents) per liter at gas stations nationwide starting Monday, including 200 stations that will sell premium fuel at the equivalent of 50 U.S. cents a liter, Maduro said. Gasoline will be limited to 120 liters (30 gallons) per month for each vehicle.

“This is a war, my dear fellow countrymen who listen to me, a brutal war,” Maduro said from the presidential palace on Saturday evening. The US is “persecuting any company that brings a drop of gasoline to Venezuela.”

Diesel, which is fundamental for industries and electricity power plants, will still be subsidized “100%,” Oil Minister Tareck El Aissami said in the event with Maduro. State-owned PDVSA is able to meet Venezuela’s vehicle demand, he added.

The announcement follows the arrival of five Iranian tankers loaded with around 1.5 million of barrels of gasoline as Venezuela faces a crippling fuel shortage, following years of mismanagement, lack of investment and mounting U.S. sanctions.

An overhaul of the country’s gasoline distribution system represents a stark shift in national culture, loosening the state’s monopoly over the country’s central asset. While PDVSA would recover millions currently lost in subsidies, gasoline price hikes are a sensitive matter for the oil-rich nation — when prices were raised in 1989, Caracas burst into violent riots.

The government announced a similar plan in 2018, but didn’t follow through. It then issued a banking card and a vehicle census for those wanting to apply for subsidized gasoline. Both will used this time, Maduro said.

Venezuelans have spent hours or even days in line for gasoline in some areas of the country as fuel shortages intensify in the past two months. Those who can are paying as much as the equivalent of $4 a liter in the black market.

“Venezuela must charge international prices for gasoline sooner rather than later, to prevent it from being stolen from Colombia and the Caribbean,” Maduro said. “That should not be decreed or done haphazardly. It should be done through planning and strategy.”

H-1B visa registration for 2022 to begin on March 9, lottery results to be notified by March 31

Afghanistan crisis — Hours before fall, women plead: ‘Don’t want to go back to that horrible era’

Girls back in secondary schools in Kunduz: Taliban spokesperson