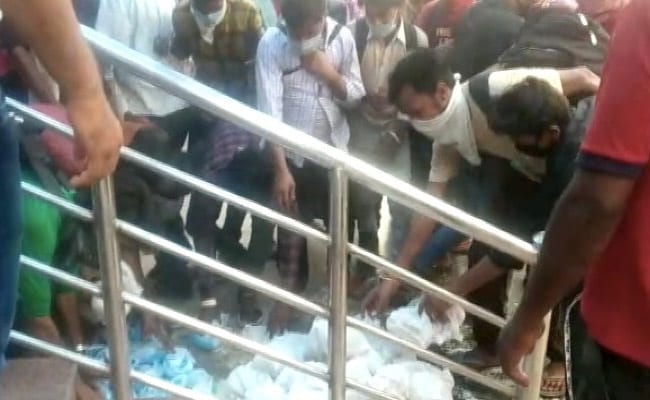 Coronavirus: Biihar has a large number of migrants returning on special trains

Distressing visuals have emerged from Bihar’s Samastipur railway station, showing dozens of men frantically shoving each other out of the way to grab handfuls of food and water packets left for them on the platform floor by the authorities.

A video of the shocking incident shows the large crowd, believed to be stranded migrant labourers brought back to Bihar on “shramik (worker)” special trains, competing with each other to grab as many plastic packets of food and water, tossed on the floor by the side of a staircase, as possible.

In the video many of the men are wearing face masks, but any thought of social distancing is entirely absent as they breathe down each other’s necks in tragic attempts to get some food and water.

Social distancing and the use of face masks, as well as regular washing of hands, are among basic measures advocated by health experts to prevent the spread of the contagious COVID-19 virus.

The 20-second-long video from Samastipur comes less than a fortnight after similarly shocking scenes were witnessed at Bihar’s Katihar station, which is around 300 km from state capital Patna.

In the Katihar incident, a fierce fight over food packets broke out between passengers of a “shramik” train from Delhi that had stopped en route to Patna. The video shows a group of men snatching food packets from a man who was apparently distributing them.

Migrant workers have been, and are being, transported across the country in special trains organised by the Railways, which has said that food and water has been arranged for them.

However, the videos from Bihar and Madhya Pradesh raise questions about the Railways’ handling of the migrants amid their heart-breaking journey home.

Lakhs of them were left without jobs, shelter or money, and with no way to return home after public transport was abruptly halted in March because of the lockdown. Left with no option, thousands were forced to walk, often hundreds of kilometres, in a bid to go home.

The centre, reportedly fearing backlash over the humanitarian crisis, authorised special trains to take them to their home states, but the trains have been mired in multiple controversies, including disputes over fares.

Parineeti Chopra Shares Picture Of Her South Indian Meal With This Heartfelt Note!