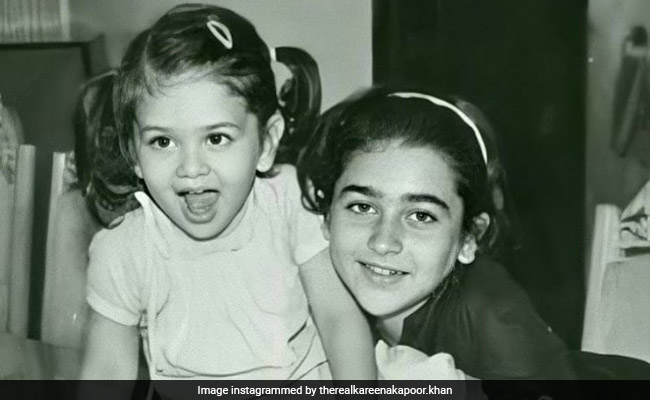 Kareena and Karisma Kapoor are one of the most-loved siblings of Bollywood and it’s always a delight when we chance upon their throwback pictures. In case you are wondering why we are saying this, it’s because a really old photograph of the Kapoor sisters is going crazy viral on social media and it is beyond adorable. The black and white photograph features pint-sized Karisma holding Kareena adorably as the duo pose for the camera. Needless to say, tiny Kareena’s expression stole the spotlight on the Internet. The picture was originally shared by a fan club dedicated to the Refugee actress. Take a look:

On the work front, Kareena Kapoor has featured in several films such as Jab We Met (2007), Kurbaan (2009), 3 Idiots (2009), Talaash: The Answer Lies Within, Heroine (2012), Udta Punjab (2016) and Bajrangi Bhaijaan (2015). She was last seen in Angrezi Medium, which also featured late actor Irrfan Khan, Dimple Kapadia, Radhika Madan, Pankaj Tripathi and Deepak Dobriyal. Kareena will next be seen in Karan Johar’s period drama Takht and Lal Singh Chaddha, in which she will share screen space with Aamir Khan. Lal Singh Chaddha is a remake of the 1994 film Forrest Gump.

Karisma Kapoor, on the other hand, was last seen in the last seen in web-series Mentalhood. Her last film remains the 2012’s Dangerous Ishhq.

AFI bars its athletes from handshakes, hugging and spitting at training camp

“Saroj Khan Brought Out The Dancer In Me”: Anil Kapoor, Who “Learnt A Lot From Her”