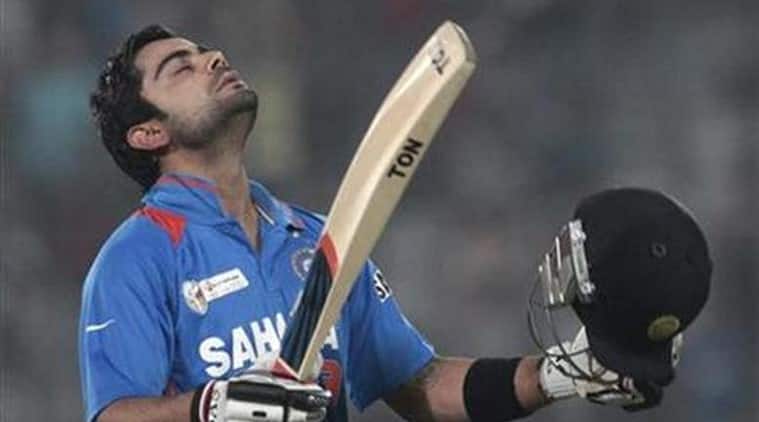 
Virat Kohli walks off the field after being dismissed during their Asia Cup One Day International (ODI) cricket match against Pakistan in Dhaka. (Source: Reuters)

Virat Kohli smashed his highest ODI score of 183 against Pakistan as a 23-year-old back in 2012. There were innings before this where Kohli had shown he was an exceptional talent but on 18th March 2012 in Dhaka, the Chase Master was born.

Chasing a daunting total of 330, India pulled off a thrilling victory with 13 balls to spare thanks to Kohli, who notched up his third one-day century in four matches.

Rohit Sharma (68) and Sachin Tendulkar (52) also chipped in as India surpassed their previous highest successful run chase of 326/8 against England in 2002. Kolhi belted 22 boundaries and one six while Tendulkar and Sharma also clobbered the Pakistani bowlers, with each hitting five fours and a six.

The 23-year-old also shared a 133-run second-wicket partnership with Tendulkar and both players produced a flurry of boundaries to ensure India was on top of the required run rate.

Turns out Kohli’s dazzling batting display is a fond memory for the Indian captain himself.

Speaking to India off-spinner R Ashwin on his Instagram Live, Kohli revealed the challenging circumstances under which he got this hundred and why it remains a special memory to date.

“Somethings are just meant to him. I remember Sachin and Sehwag had a great partnership and then Gautam Gambhir and I had one,” recalled Kohli.

“Raina came in to change the momentum. In conditions that were not ours, although the pitch was good, I understood my game better. I realized a lot about my own game. I can have the belief of staying in the moment when things are tough.

This was also the game where India wasn’t exactly on top of their fielding as in one particular incident Kohli and Rohit collided against each other at the deep mid-wicket, upsetting then skipper MS Dhoni

“MS wasn’t too happy about it. We were chasing 330, then we messed up a bit. We gave 3 away with that poor mistake. My right side of the head hit his shoulder,” Kohli laughed.

Incidentally, the bowler was R Ashwin

Getting back to the knock, Kohli said, “The Pakistan bowling attack was quite potent. They were challenging because of the variation they had- Shahid Afridi, Umar Gul, Saeed Ajmal, Aziz Cheema, Wahab Riaz, Mohd Hafeez. Ajmal was particularly dangerous as he was it his peak back then.”

“It was quite a strong attack and in Bangladesh, the pitches are dry early on and then the dew settles in as the sunsets. So for the first 20 overs, it was in their favour. But I was happy batting next to Sachin,( which incidentally was the master blasters last ODI),” Kohli reminded before adding, “The chase was tough and Ajmal was indeed at his peak.”

“But before that game, India had played a T20 World Cup in Sri Lanka. There was a warm-up game and I got a 75 against them. In that match, I had told myself that I will play him as a leg spinner. Because his doosra was quite difficult to face and his off-spinner was not that lethal. so I decided to hit him over covers consistently and it just paid off.

“As soon I negated his doosra then the potency of his threat reduced. Even in that game I scored most of my runs against him through the off-side and kept doing it even against the turn. My only aim was to make him feel unsettled with his doosra and only then I am at the top of my game.”

SpaceX-NASA Mission to ISS on Schedule Though Weather Remains Uncertain