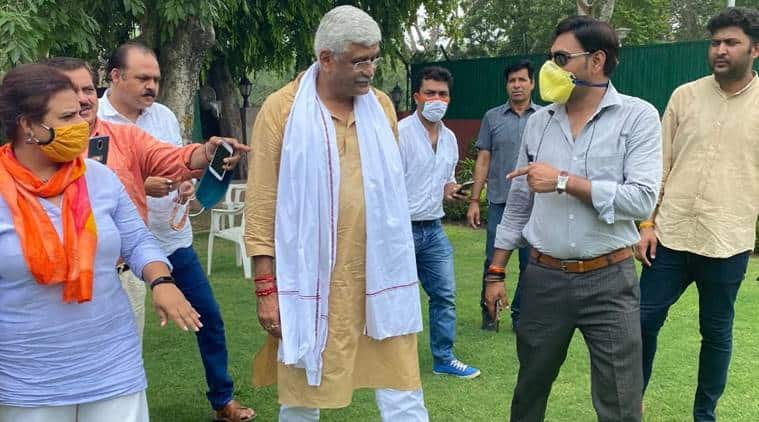 Union Minister Gajendra Singh Shekhawat on Friday dismissed the Congress’ allegations that he was involved in an alleged conspiracy to topple the Ashok Gehlot government in Rajasthan. While the ruling party has filed an FIR against him, the BJP leader said the voice in the purported audio clips did not belong to him and that he was ready was a probe in the matter.

“It is not my voice. I don’t know which Sanjay Jain they are talking about. I know many people in that name. If I had talked to someone, my number should be there. You can conduct a probe. I am ready for an investigation,” Shekhawat said.

Jain, Congress spokesperson Randeep Singh Surjewala has alleged, is a BJP leader who was also involved in the plot to disrupt the Rajasthan government. Surjewala also referred to two purported audio clips this morning to support his claims.

He also said that an FIR should filed by the Special Operations Group of the Rajasthan Police against Shekhawat, Sharma and Jain for the alleged conspiracy to topple the government.

The Congress leader also said that if there are any chances of influencing the investigation by misusing his Union minister’s post, then Shekhawat should be arrested by obtaining a warrant. He added that a similar action must be taken against Sharma and Jain.

Apart from those who have been named in the conversation in the audio tapes, Surjewala demanded a probe to find out whether any other person or MLA is involved in the alleged exchange of money for toppling the government.

The Rajasthan High Court is slated to hear a petition by former deputy chief minister Sachin Pilot and 18 MLAs against the disqualification notices issued to them by Assembly Speaker C P Joshi. The notices were served after the ruling party complained to the Speaker that the MLAs had defied a party whip to attend two Congress Legislature Party meetings, on Monday and Tuesday.

To avoid Covid complications, these states have banned firecrackers ahead of Diwali