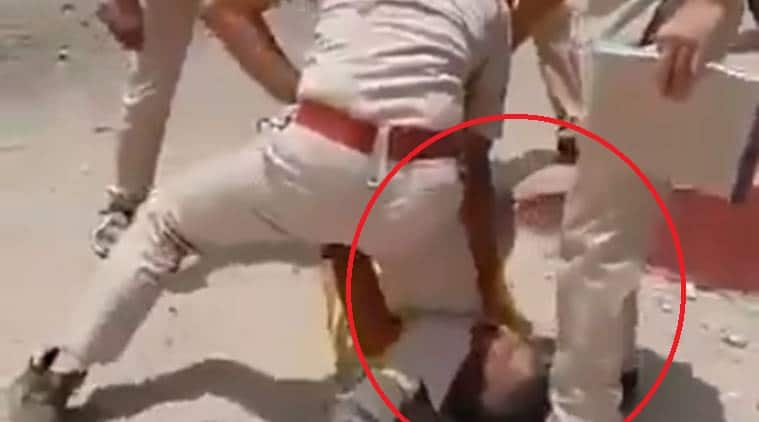 
One of the constables can been seen kneeling on Prajapat’s neck for a few seconds in the viral video.

In a stark reminder of the George Floyd case, a video of a police constable kneeling on the neck of a man for not wearing a mask in Jodhpur has gone viral on social media. Jodhpur DCP (West) Priti Chandra, however, said the cop had acted in self defence to prevent the man from attacking him.

The incident took place on Thursday when Mukesh Kumar Prajapat was caught roaming without a mask by two police constables. Amid the coronavirus pandemic, the government has made it mandatory for citizens to wear a mask before stepping out.

The cops alleged that Prajapat started slapping and hitting them when they tried to control him.

One of the constables can been seen kneeling on Prajapat’s neck for a few seconds in the viral video.

“So, the policemen called for a jeep but before it could arrive, the man started slapping and punching both the constables – there are videos of the same. We have filed an FIR against him and arrested him,” she added.

Speaking in favour of her colleague, Chandra said that the constable had acted in self defence to stop Prajapat from attacking further.

“Dono constables daba ke baithenge, iske maar thori khayenge (It is natural that the cops will subdue him and not get beaten up),” the DCP said.

Jodhpur police also referred to two cases filed against Prajapat, including one by his father filed last year where he had alleged that his son had gouged his eye.

Chandra said, “The person was without a mask and in Jodhpur West alone, we are taking action against 400-600 (persons). If someone is not wearing a mask, then chances are high that the virus might spread fast.”

In the US, the recent killing of George Floyd by a Minneapolis cop who knelt on his neck for nine minutes has sparked massive outrage across the country.

How the states handled domestic flights on Day 1