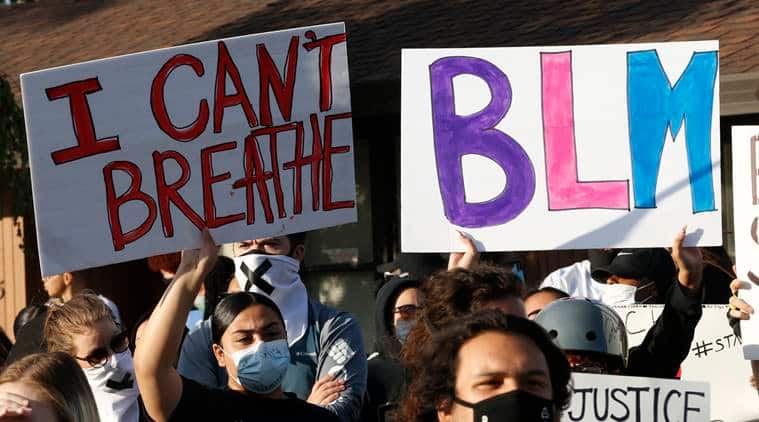 In the wake of nation-wide protests against the custodial killing of African American George Floyd in the United States, several videos shared on social media show police officials using rubber bullets, chemical irritants and excessive force in an attempt to quell unrest. While a few officials have been penalised for their aggressive attack on demonstrators, several others have faced no consequences.

Floyd died on May 25 after being pinned to the ground and suffocated by a Minneapolis police official. His death sparked widespread protests against the systemic oppression and police brutality faced by African Americans. Violent standoffs between police and demonstrators broke out at protests across the country. Law enforcement authorities have been caught on camera striking protestors with their batons and firing at them with pepper bullets, smoke bombs and tear gas.

A video shot in Buffalo, New York captured police in riot gear shoving a 75-year-old man and knocking him to the ground. In the video, the man is seen lying on the pavement with blood streaming from his head. The two police officers involved in the incident have since been suspended without pay.

BREAKING: Buffalo’s police commissioner orders immediate Internal Affairs investigation into this incident: 2 officers shoving an elderly man, who walked up to them, to the ground. @news4buffalo reports the man suffered a laceration & possible concussion
pic.twitter.com/qbTvXAAPLH

A similar incident occurred in Salt Lake City, Utah, where a local news outlet filmed police officials knocking out an elderly man with a walking stick to the ground while clearing protestors from the area. Two other policemen are then seen helping the man stand up again.

Salt Lake City cops shove down an elderly man with a cane for the crime of standing along the street: pic.twitter.com/PCLkHqQtJg

Earlier this week, a video surfaced in which Minneapolis police officials were seen shooting paint canisters at people standing on their front porch while patrolling a neighbourhood to enforce curfew. A large group of policemen and National Guard soldiers are seen marching down the street ordering people to get inside their homes.

A 20-year-old university student allegedly suffered brain damage and a fractured skull after police shot him with beanbag rounds — a less-lethal ammunition — during a protest in Austin, Texas on Sunday. In a video shared widely on social media, protestors are seen clearing the crowd and carrying him to safety.

In a video shared last month, a New York Police Department (NYPD) official was seen pulling down the mask of a protestor to directly pepper spray him in the face. The victim was standing still with his hands up when the policeman approached him.

Notice they are covering their badge numbers: pic.twitter.com/ohbFe1ORIN

Several videos were posted on Twitter earlier this week showing two NYPD SUVs mowing down protestors who stood behind a barricade. The vehicles appeared to rev up as they approached the crowd of demonstrators. While many protestors were knocked to the ground, no reports of severe injuries have emerged.

The media was not spared while covering the protests. Several videos show law enforcement authorities firing rubber bullets directly at reporters and their crew. Photojournalist Linda Tirado was left partially blind after being struck in her left eye with a rubber bullet.

an update: I am permanently blind in my left eye, and the docs absolutely refuse to let me go back to work for they say six weeks. I’m definitely not allowed to be near smoke or gas.

Watch the shocking moment #7NEWS reporter @AmeliaBrace and our cameraman were knocked over by a police officer LIVE on air after chaos erupted in Washington DC. pic.twitter.com/R8KJLnfxPN

Earlier, US President Donald Trump and several members of his administration were sued by multiple civil rights groups for allegedly launching an aggressive attack on peaceful protestors gathered near the White House on Monday.

This was the scene outside of the White House on Monday as police used tear gas and flash grenades to clear out peaceful protesters so President Trump could visit the nearby St. John’s Church, where there was a parish house basement fire Sunday night https://t.co/nFrCqYpqZR pic.twitter.com/DVP11iiVIh

In states across the United States National Guard soldiers were deployed, curfews were imposed and thousands were arrested after mass outrage caused by Floyd’s death escalated into riots and looting. Several policemen have also been attacked and their vehicles have been vandalised by protestors, as per reports. Earlier, the Minneapolis 3rd Precinct police station, where Floyd’s killer was believed to have previously worked, was stormed by protestors and set ablaze.

Expelled from US at night, migrant families weigh next steps

US: Man charged with killing 8 people at Georgia massage parlours

John Bolton can publish Donald Trump book despite efforts to block it: Judge

With just days to go, Britain urges business to prepare for end of Brexit transition