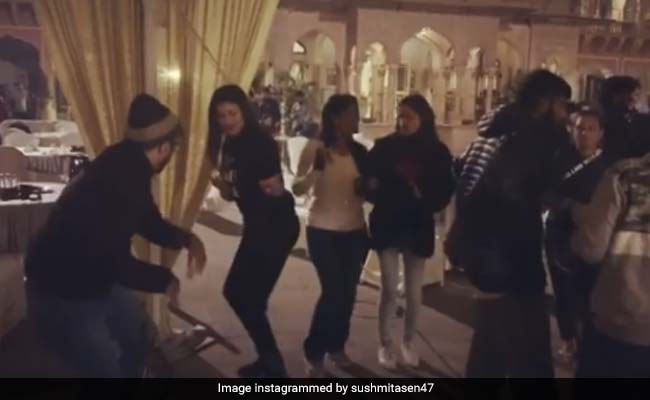 Sushmita Sen in a still from the video. (courtesy: sushmitasen47 )

Sushmita Sen had oodles of fun on the sets of the web-series Aarya, going by her latest Instagram entry. On Sunday, the 44-year-old actress posted a behind-the-scenes video from a fun dance session on the sets of the show. In the video, Sushmita can be seen dancing with the crew of show to the song Aankh Marey from Ranveer Singh and Sara Ali Khan’s 2018 film Simmba. Sushmita introduced Sandeep Modi, the co-creator and the co-director of Aarya and she wrote: “Introducing co-creator, co-director of Aarya. A fabulous director, who made the whole unit dance around the whole day…Then we made him dance after pack up. And boy, can he dance (the one with the cap). The sheer energy of the making of Aarya remains special in so many ways.”

Check out the video here:

Speaking of her role in Aarya, Sushmita Sen recently told news agency PTI, “By God’s grace, I got the most incredible beautiful content, a fantastic platform, Hotstar+Disney For me, this culmination of everything coming together has been because I gave it time, I gave my everything to wait. I said I will sit at home but when I do something it has to be worth it. And I can proudly say it now.”

Sushmita Sen was crowned Miss Universe in 1994. She made her Bollywood debut in the 1996 film Dastak. She has featured in films such as Biwi No 1, Do Knot Disturb, Main Hoon Na, Maine Pyaar Kyun Kiya, Tumko Na Bhool Paayenge and No Problem.

“Never Have I Ever”: Alaya Furniturewalla Takes Up ROFL TikTok Challenge

Trending: Throwback To The Time When Priyanka Chopra And Nick Jonas Danced To Hauli Hauli