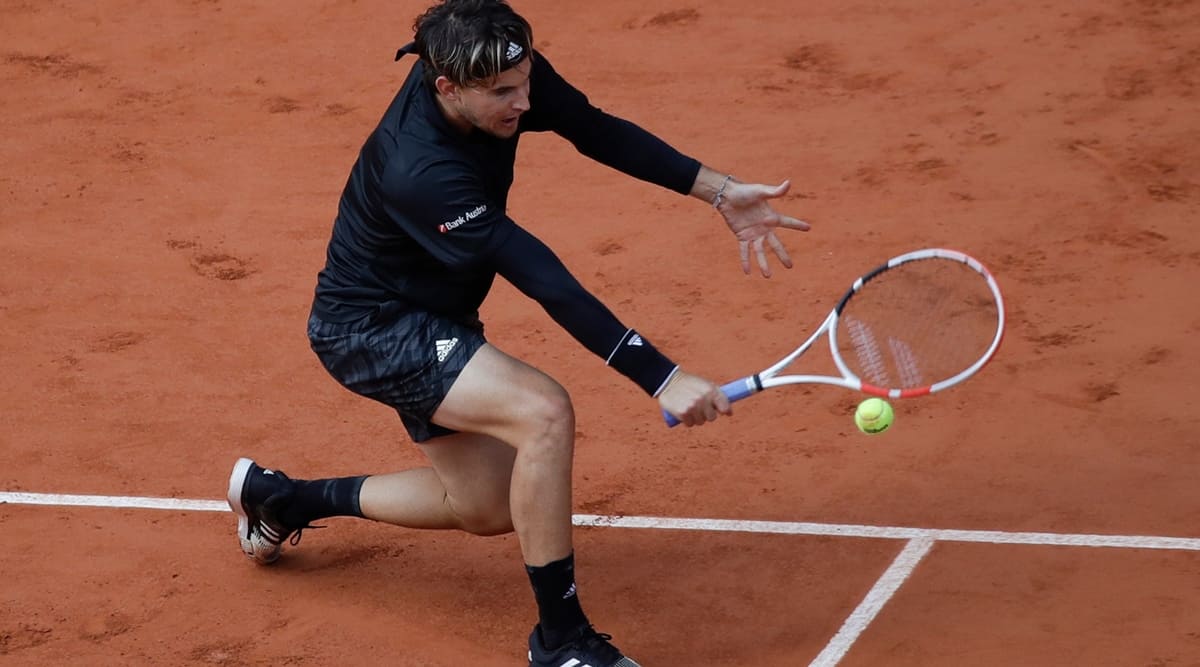 
Austria’s Dominic Thiem plays a shot against France’s Hugo Gaston in the fourth round match of the French Open. (AP Photo)

For a Grand Slam known for its baseline slugfests, it’s the delicate dinks over the net that have caught the eye at the French Open this year. The drop shot – a high risk slice –has become the go-to shot to change the pace and set up a winner at the rescheduled Roland Garros. In his first round match against Mikael Ymer, World No 1 Novak Djokovic played the drop shot 25 times. Given you need a minimum 24 points to win a set in a match, that’s one set pocketed through just the drops.

And it’s no coincidence that the number of attempts at the drop shot has increased per match, as a fair few factors have aided the temptation of playing the deceptive shot.

What is a drop shot and why is it high-risk?

It is a sliced shot off either side (forehand or backhand) that is played with backspin and sometimes sidespin. The shot is intended to bounce close to the net on the opponent’s half and die down inside the service line.

The reason this becomes high risk is that the shot needs to have a low net clearance, which means that there is a chance it may crash into the net. At the same time, if the shot is over-hit slightly, it gifts the opponent a harmless short ball perfectly in the slot that can be easily put away for a winner.

It also needs to be played at the right time, when the opponent is deep behind the baseline. Otherwise there is a chance the opponent will reach the ball in time to play an effective return.

Why does it work well tactically?

“The reason (Djokovic has attempted drop shots so often) is he hits (at all normal times) with great depth and pace,” explains former doubles World No 1 Mark Knowles, a three-time men’s doubles Grand Slam champion who is currently in Paris on commentary-duty.

“If you’re pushing your opponent deep and realising that they’re continuing to retreat further and further behind the baseline, it’s an effective shot to use then. If you think how hard Novak hits it on both wings, most players want to give themselves a little more room to counteract, so they move back. And then if you play the drop shot, it’s very effective.”

Djokovic himself, after the match, asserted that the shot is great to use tactically as a surprise kill.

“I think it’s a great variety shot,” Djokovic said after beating Ymer. “I think it’s important tactically to have it and to use it at the right time so that you can keep your opponent always guessing what the next shot is. I may have played too many today, I agree. Maybe I exceeded what I should have played. But I think it worked well in the moments when I needed to get the point I did.”

Is the drop shot rare to the French Open?

Drop shots can be played on any surface. But on clay courts it can be a clever tactic to use. The nature of clay courts is that the ball slows down and sits up after the bounce, meaning players can retrieve shots easily and results in longer rallies at the baseline. Clay court specialists particularly tend to hug the baseline and shy away from coming toward the net.

Hence, playing a drop shot breaks the rhythm, shortens a rally, and draws an opponent forward and out of their comfort zone.

“It’s a great change of pace because these guys hit with great power,” Knowles says. “Anyway, a lot of players today struggle with the north-south (up and down) movement – coming forward sooner in the rally than they would have liked. It’s a really good strategy to employ.”

Drop shots are not alien to the French Open, but this year conditions have promoted their use.

How are the conditions helping the drop shot?

The French Open is normally held in the spring, in the May-June window. Due to the Coronavirus pandemic though, the French Tennis Federation (FFT) decided to reschedule it to last week of September, in autumn.

“The conditions are really heavy,” Knowles says. “There has been some discussion that the balls are a bit heavier this year, but it’s hard to tell because the conditions are a lot different than what it would have been like in the spring. We’ve had tons of rain, so the clay is really clumpy and slow because of the moisture.”

Due to the conditions, the clay tends to stick to the ball when it bounces, making the ball heavier. As a result, a player would need to generate more power to play a shot from the baseline.

For that power, you need a little more time to load into a shot, and so there’s a slight push further behind the baseline in order to get the precious split-second. At the same time though, moving backwards makes it that much more difficult to spring forward to retrieve a drop shot when suddenly summoned.

Has there been an increase in the amount of clay used?

The clay courts at the French Open are covered with two millimetres of red brick dust (clay). This year however, due to the damp conditions with the rain, ground-staff have to add more clay to negate the moisture.

More clay added means a greater amount of cushioning on the surface. And the greater the cushioning results in the heavier ball staying low on the bounce – ideal for the drop shot.

“I think in these conditions the ball is bouncing super low, so it’s even tougher to get it back,” said 2017 French Open champion Jelena Ostapenko after her win over second seed Karolina Pliskova in the second round.

“(The drop shot is) useful because the bounce is much lower because it’s much colder this year.”

Harmilan trains to Busan and beyond