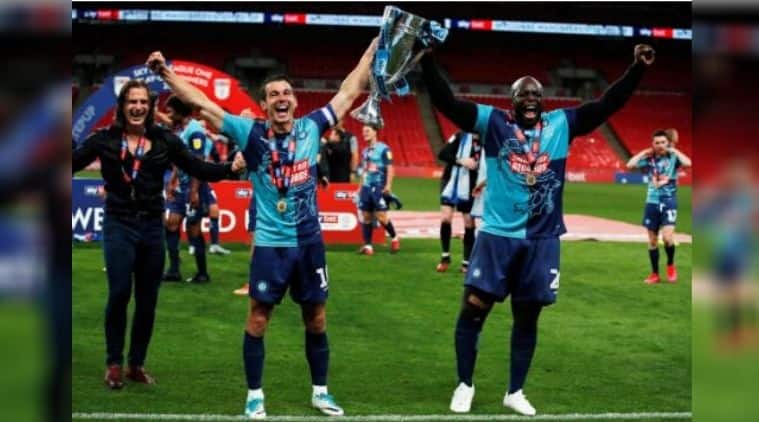 Wycombe Wanderers won promotion to the second-tier Championship for the first time after a 2-1 win over Oxford United in the League One playoff final at Wembley on Monday.

Wycombe, a non-league club until 1993, were promoted from League Two last season and secured victory thanks to a 79th minute penalty from Joe Jacobson.

Wanderers were in eighth place in the League One table before the season was terminated due to the COVID-19 pandemic but leapt up to third when the final standings were decided by the Points Per Game method.

Anthony Stewart had headed Wycombe in front in the ninth minute at an empty Wembley were fans were not allowed to attend due to COVID-19 restrictions.

But Oxford drew level in the 57th thanks to a Mark Sykes cross-shot from the right wing which looped over Wycombe keeper Ryan Allsop.

The contest was settled when Oxford keeper Simon Eastwood barged into Fred Onyadinma and Jacobson converted the spot kick.

Wycombe Wanderers striker Adebayo Akinfenwa has received a congratulatory message from Liverpool manager Juergen Klopp after his side sealed promotion to the Championship.

The 38-year-old Akinfenwa joked in his post-match interview that Klopp, who guided Liverpool to the Premier League title this season, could “hit me up on WhatsApp” to celebrate their successes together.

“I’m pretty sure your whole life at least a Championship player and now finally, you are there. Well done. Great, great victory. Even in these strange times, I hope you celebrate appropriately.”

US rejects nearly all Chinese claims in South China Sea

Airtel BlueJeans Debuts as Airtel’s Answer to JioMeet and Zoom

England’s tour of Sri Lanka rearranged for January, Tests to be played in Galle

Iga Swiatek, the math-head who can write history